The protesters, organized by the DSA-LA’s Sanctuary City Working Group, chanted slogans like, “Money for jobs and education, not for ICE and deportation,” as attendees trickled into the event. 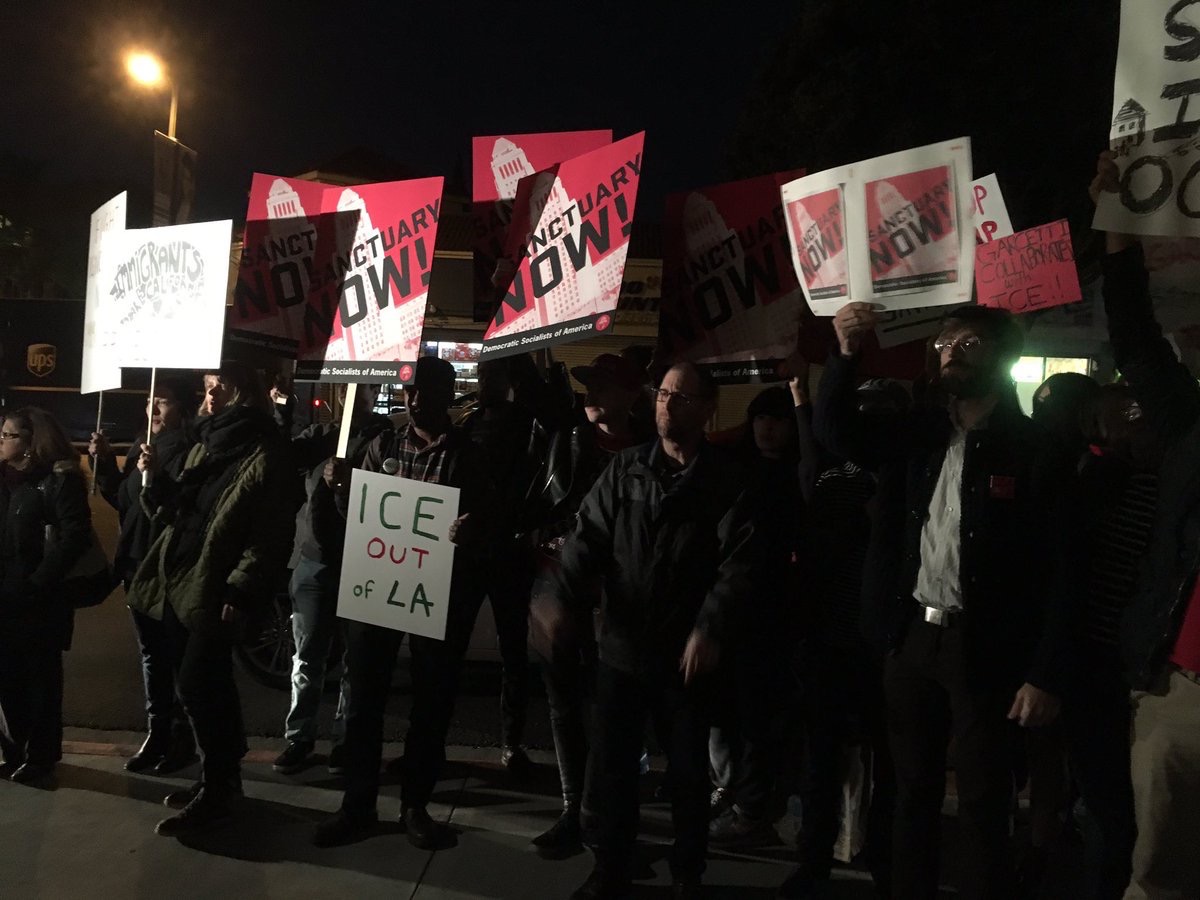 When the gates were closed and the event began, the protesters continued to chant and some shared personal stories about how deportations have affected their lives. Los Angeles-area activist Tudor Popescu projected a message saying, “Migration is beautiful” on the side of the building. 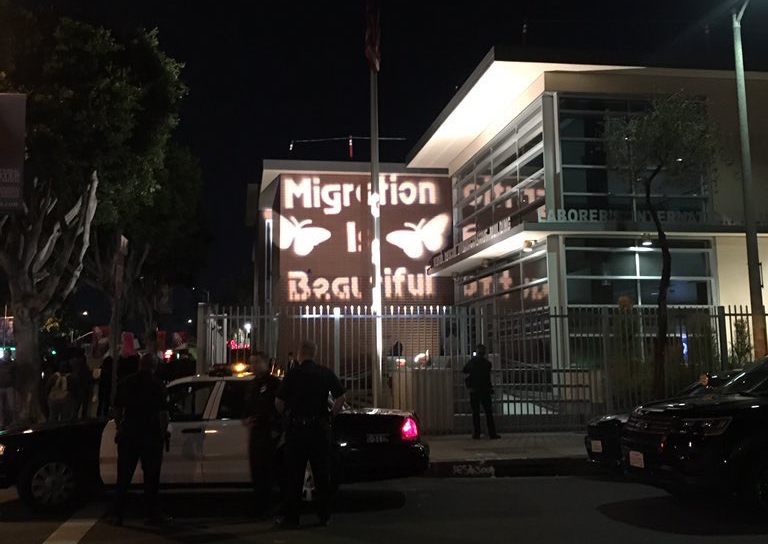 When Garcetti took the stage for his victory speech, a group of DSA-LA members who had made it inside for a planned disruption began chanting, “ICE out of LA!” The protesters were forced out of the building, but not before attracting the attention of several news outlets.

Garcetti addressed the disruption in his speech. He said, “I actually love that we have folks here exercising their First Amendment rights… Protest, speak out, come crash a campaign party. Do whatever you need to be heard.”

The protests were motivated by Garcetti’s refusal to unequivocally declare Los Angeles a sanctuary city. While Garcetti has paid lip service to sanctuary status for Los Angeles, concrete plans of action remain vague. In a March 1 interview with NPR, Garcetti claimed that Los Angeles is “the strongest defender of immigrants perhaps of any city in this country.” Two days later, ICE agents in an unmarked vehicle detained Romulo Avelica-Gonzalez in Highland Park after he dropped his daughters off at school - highlighting the dangers of the mayor’s lymphatic approach.

In order to prevent future terrorization of the Los Angeles community by immigration officials, the DSA-LA Sanctuary City Working Group has the following policy demands:

a. Prevent collection of unnecessary information about immigration status;

c. Prohibit local resources (including law enforcement) from being used for federal immigration enforcement or the establishment of a Muslim registry; and

d. Establish a body to monitor and oversee immigration enforcement actions in the City and affecting City residents.

2. Refuse to enact the forthcoming national stop-and-frisk policy of the Trump administration, which will exacerbate the targeting of communities of color, place the most vulnerable communities under increased threat, and feed mass-criminalization and mass-incarceration.

3. Modernize the Los Angeles Police Department’s (LAPD) Special Order 40, the police policy intended to promote public safety by protecting immigrants. Special Order 40 was drafted in 1979 and should be updated to protect the City’s diverse population in this new era under the Trump administration.

4. Ensure that the LA Justice Fund is based on principles of universality and inclusiveness with the goal of ensuring critical due process rights for all people in deportation proceedings, including all individuals in immigration detention.

5. Oppose President Trump’s measures scapegoating and discriminating against Muslims, including by:

a. Endorsing SB 31, which would ensure that state and local agencies and personnel do not participate in or use agency resources to create a registry, list, or database of individuals based on religious beliefs, practices, or affiliations, national origin, or ethnicity; and

b. Declining the nearly $1 million dollars in grants that the City of Los Angeles is receiving from the federal government to implement programs aimed to "Counter Violent Extremism," (CVE) which play into harmful stereotypes and unwarranted targeting of the Muslim community.

6. Stand up to protect the rights of LGBTQ people and vigorously oppose any attempt by President Trump to institute a “license to discriminate” against LGBTQ people. Work decisively with elected officials and community partners to establish measures that will ensure the Trump administration does not roll back the clock on justice and equality for LGBTQ communities.

7. Ensure that the civil rights and well-being of residents are protected by establishing stricter fair hiring policies in public contracting and by investing in formal partnerships with state agencies to build comprehensive enforcement strategies to address heightened bias and discrimination through vigorous enforcement of Title VII and other fair hiring standards in the City of Los Angeles.

8. Protect street vendors from improper and damaging criminal prosecutions by ceasing to issue citations or taking other enforcement actions against street vendors while the City Council is considering plans to legalize street vending; pardoning past tickets, fines and fees, and/or offenses for sidewalk vending; and creating an inclusive, citywide permit program that legalizes sidewalk vending and promotes economic opportunity for all.

9. Expand existing levels of funding for day labor centers to ensure access to jobs and to reaffirm the City commitment to enforce wage theft and labor violations regardless of immigration status.

10. Develop a City budget that funds housing, youth programs, mental health resources, crime prevention/intervention work, and living wage jobs (those priorities that have the greatest level of success in making communities safe) at a level that exceeds funding for police.